Women portraying civilians and those representing Axis and Allied forces of Western Europe in 1944 are invited to attend the event. ETO, Home Front, British, French, German and Partisan impressions and displays are welcome and encouraged. All persons attending the event should be acquainted with the general authenticity regulations as they apply equally to all event participants. The following are supplemental guidelines for female reenactors attending the event. Note: the material contained on these pages is not inclusive. All female impressions are accepted and encouraged.

1. Dress and grooming should be consistent with 1944 Europe and North American Standards.

a. Hair:
Hair is to be done in a 1940s style that is neat and kept off your collar (no victory rolls) per WAC regulations

ii. Modern hair color is not permitted (e.g. blue or pink) and modern hairstyles should be covered or altered to appear "vintage"

b. Women's makeup:
Per WAC Regs, women were allowed to wear makeup as long as it showed “good taste and kept inconspicuous” and light colored nail polish. Makeup for the 40s was very light in comparison to modern makeup trends. I will be posting a 1940s military approved makeup tutorial for everyone to have as a reference. Please NO eyeliner, overdone makeup, etc.

2. Tattoos must be completely covered at all times while in uniform or 1940s dress. The use of makeup on exposed tattoos is highly encouraged. Alternatively, opaque hose and/or long sleeves can be used to cover tattoos.

3. Military courtesy will be in effect in the camp. Non-military participants should use 1940's "manners" during public hours

5. All tools, drinking vessels, utensils and other common items should date to 1944 or before

Military Impressions in the Encampment

Women portraying military impressions must wear an authentic combination of Uniforms and Equipment as would have been seen in the UK/European Theater of Operations prior to June 6, 1944. Uniforms and equipment must be original or quality reproductions. The expected uniforms for certain impressions, by day, are outlined below.

Uniforms, regardless of impression - unit, nationality, or gender - should be worn in a regulation or documented fashion. As these are military uniforms of the respective countries, although no longer in use, they should be worn in a manner befitting a soldier of the time period. Overall military appearance and proper wear of the uniform and equipment will be required in camp. Though some women's attire is difficult to obtain, women portraying military impressions should ensure that they wear the entire uniform as it was intended in WWII. Female uniforms should be complete and not mix grades of uniforms or insignia. Appropriate headwear should be worn for the circumstances

We are aware that the Army Nurse Corps had a variety of uniforms. The only uniforms authorized are June 1944. The following uniforms are NOT authorized to wear by participants as they were not the norm in the ETO, however they may be displayed as part of a uniform grouping display, and/or 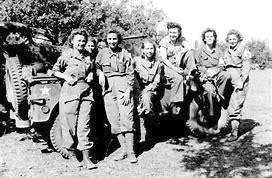 may be worn after hours when there is no public presence. 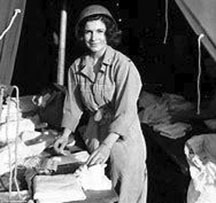 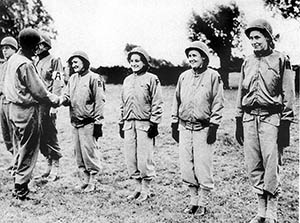 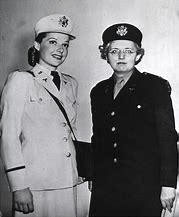 To be worn on parade, formal functions, or if in an Admin position 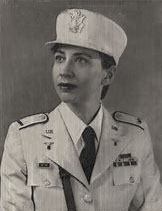 *Note: The off duty dress is a private purchase item and not listed as an issue item. The off duty dress is worn when not on duty. In camp we try to strive to represent the training forces in England and invasion forces of France, therefore the off duty dress is not a work uniform. This uniform is more frequently seen in England and only seen in France after the liberation of Paris. While this uniform is authorized please understand that it is not representative of a uniform that would be worn in garrison or in field work, so that when dealing with the public for educational purposes please make sure to distinguish the difference in the uniform. This is also true for the 1942 Beige Dress Uniform.


All US female military participants must wear the appropriate shirtwaists/ties/accessories for their uniforms. 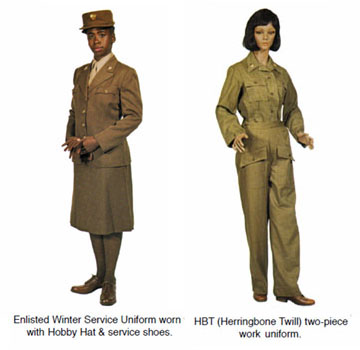 •   Winter Service Uniform: Cap, WAC, (Also known as Hobby Hat) or Wool Garrison Cap
•   Garrison Jacket: wool, women's (also referred to as a "blouse" not to be confused with the "Ike" style jacket)
•   Skirt: wool
•   Women's Shirt: Cotton or Wool
•   Service Shoes or Field Shoes
•   Necktie
•   Appropriate insignia. NOTE: If reproduction footwear is not available, shoes should be a russet oxford with minimal decoration and a heel of 1 and 1/2 inches
•   Hat: herringbone, twill (also referred to as a Daisy Mae)
•   Jacket and Trousers: herringbone twill or Coverall Herringbone twill (Women's HBTs preferred, but Men's allowed)

All U.S. female military participants must wear the appropriate shirtwaists/ties/accessories for their uniforms

Resources we would recommend to those just becoming acquainted with their military impression of choice include Dressed for Duty and Quartermaster Study Guide, A Wardrobe for the Women of the Army written in 1945. We would also recommend Women for Victory: American Servicewomen in World War II. 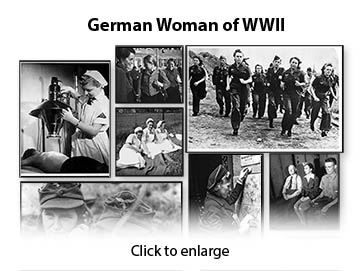 •   Medium grey pleated front blouse with contrasting white collar. White blouses worn with this skirt in walking out dress
•   Skirt in the matching grey with two front pleats and concealed pockets
•   DRK triangular cloth patch worn on right sleeve & plain white Red Cross armband on the left
•   Uniform jacket - double breasted grey of the same color with two rows of buttons, & a dark grey contrasting collar and outwards-buttoning sleeve tabs. Red Cross collar patches are worn on the collar
•   Field dress will consist of the blue-grey and white striped ward dress with matching white apron (normally of bib-type)
•   The starched white nurse's cap will be worn with the ward dress. The Red Cross armband will be worn on the left upper arm and the standard DRK triangular sleeve patch will also be worn
•   Shoes will be black lace tie up leather uppers consistent with 1940's Germany worn with white socks

NOTE: This uniform has been limited due to the differences between the National Socialist DRK and the Regular DRK. We do not allow ANY political uniforms of any type

White poplin, worsted wool, or cotton blouse with long sleeves or short sleeves (depending on season) and either two open-topped breast pockets or one open-topped pocket (on the left) and one flap-topped pocket on the right. In the case of the two open-topped breast pockets, there should be a two-button closure on each pocket. In the case of the dual pocketed shirt, there should be a two-button closure on the open-topped pocket and a single button closure on the flap-topped pocket. The buttons should be flat, white, and four holed. 4 Larger buttons down the center front of the shirt, similar but smaller buttons on the pockets and cuffs. The long sleeved version of the blouse is to be worn underneath the jacket. The short sleeved version of this blouse isn't worn with the jacket, but is acceptable to wear for summer events. Jungmädel uniforms may also have 2 buttons at the waistline of the shirt which button into the waistline of the skirt.

•   The skirt is made of dark blue wool with waist belt loops and a single central pleat in center front from hem to mid thigh. Left side closure. A plain black belt with a silver buckle is worn through loops. The skirt has two internal front pockets with slanted buttoning external flaps. Length of skirt can be anywhere from knee length to mid-calf
•   The uniform jacket consisted of a faux velour/ faux suede. Original jacket colors varied from light tan to caramel brown. The jacket is waist length - it is shorter in the back and comes to two points at the hips in the front. It is single breasted with six buttons closures. Four patch pockets with a single button closure on each, are on the front. The back of jacket has two half belts at the hip for fit. The black triangular district patch of the BDM member's home district is worn on the upper left sleeve. Below this is the red/white diamond shape Hitler Youth insignia.
•   A black scarf is worn around the neck with a leather slipknot
•   No jewelry should be worn, including earrings, rings, necklaces, bracelets. Watches are permitted
•   No makeup should be worn
•   Shoes are flat soled oxfords in black or brown. Shoes may have heel and toe plates
•   White cotton socks are the only acceptable color for summer uniform

Single breasted feldgrau jacket with three button fastening with two rectangular skirt pockets and a single open left breast pocket. The upper collar must be unlined (unless portraying and officer impression, please check with Axis Command for this event). The jacket bears the oval black cloth patch with silver edging bearing the SS runes. The SS version of the National Emblem is worn on the upper left sleeve 16 cm from where the sleeve comes off the shoulder. Cuff title bearing the Reichsschule-SS (only in a training role) all others must bear the SS-Helferin to be worn 14 cm above the edge of the cuff.

*NOTE: In September 1943 Heinrich Himmler, the Reichsführer-SS, gave the order that the SS-Helferinnen are not allowed to wear the national emblem (Reichsadler) on the blouse (but were allowed on the jacket, the coat and the cap) and not allowed to wear the sign of lightning anywhere on the uniform (Signallers Badge) [Tagesbefehl 144/43, 6.9.1943, Bundesarchiv Berlin, NS 32 II/56, Bl. 149]. SOURCE: Das SS-Helferinnenkorps Ausbildung, Einsatz und Entnazifizierung der weiblichen Angehorigen der Waffen-SS 1942-1949: by Jutta Muhlenberg

NO SIGNALS BADGE IS TO BE WORN ON THIS UNIFORM AS THIS IS A 1944 EVENT AND IT IS HISTORICALLY INACCURATE TO WEAR THIS ON THE UNIFORM.

*NOTE: In September 1943 Heinrich Himmler, the Reichsführer, gave the order that the SS-Helferinnen are not allowed to wear the national emblem (Reichsadler) on the blouse (but were allowed on the jacket, the coat and the cap) and not allowed to wear the sign of lightning anywhere on the uniform (Signallers Badge) [Tagesbefehl 144/43, 6.9.1943, Bundesarchiv Berlin, NS 32 II/56, Bl. 149].